Between the world wars, Sears built 10 huge centers across the country. The one to three million square meter fortresses served as a department store, regional office and fulfillment center for the catalog business. When Sears’ business shrank in the early 1990s, the centers closed. Most sat idle for years. Three were eventually demolished. The one in Seattle became the headquarters of Starbucks. Some turned into condominiums. The one in Memphis became the most interesting adaptive use project in America.

Just before the Great Recession of 2007, Staley Cates bought the vacant 1.5 million square foot Sears Crosstown building for $ 3 million – a square foot bargain, but a disaster of a building in a ruined and forgotten neighborhood.

In 2010, art history professor Todd Richardson and video artist Christopher Miner founded Crosstown Arts to work with Cates to inspire redevelopment of the old Sears building and empower Memphis’ creative community. Together with development and design specialists, they worked on a feasibility plan during the day. With the help of additional grants, Miner and Richardson hosted art, music, and maker events at night. A plan for a contemporary art center collapsed – perhaps part of the building could be an art and music mecca with performance and gallery space.

The feasibility study made two things clear: funding would have to come from multiple sources (city, county, state, state, philanthropy, and private), and most of the building would need to be pre-let to get it operational. These conclusions, in the face of growing community interest, led to a new vision of a “vertical urban village” with a mix of homes, restaurants, health, education, arts and culture venues. By the end of 2012, eight local organizations, including Church Health, Memphis Teacher Residency, Methodist Le Bonheur Healthcare, and St. Jude Children’s Research Hospital, had committed to renting more than 400,000 square feet in the building. A variety of highly respected organizations recognized the value of being “better together” with Crosstown Arts at Crosstown Concourse.

Church Health sponsors a huge YMCA facility on the second floor (below). 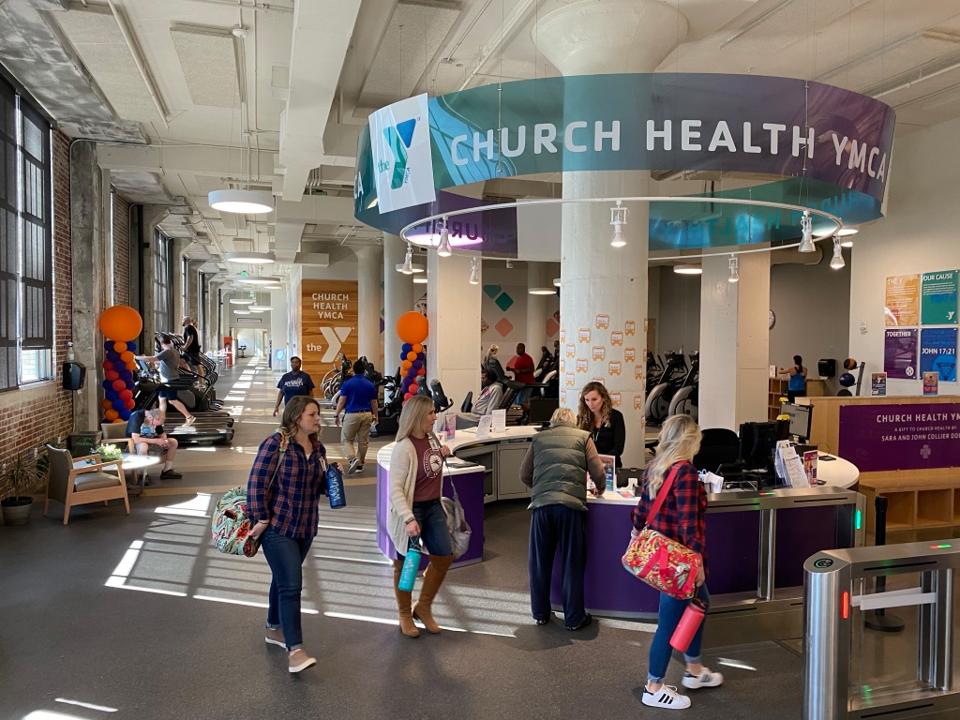 The Church Health YMCA attracts fitness enthusiasts to its gym, which is also located in the … [+] Building.

Construction began in the winter of 2015. Huge squares were cut out of floor slabs to create three ten-story atriums that let natural light pour into every room in the building. Live music and dance performances celebrated the grand opening in August 2017 with more than 13,000 participants. 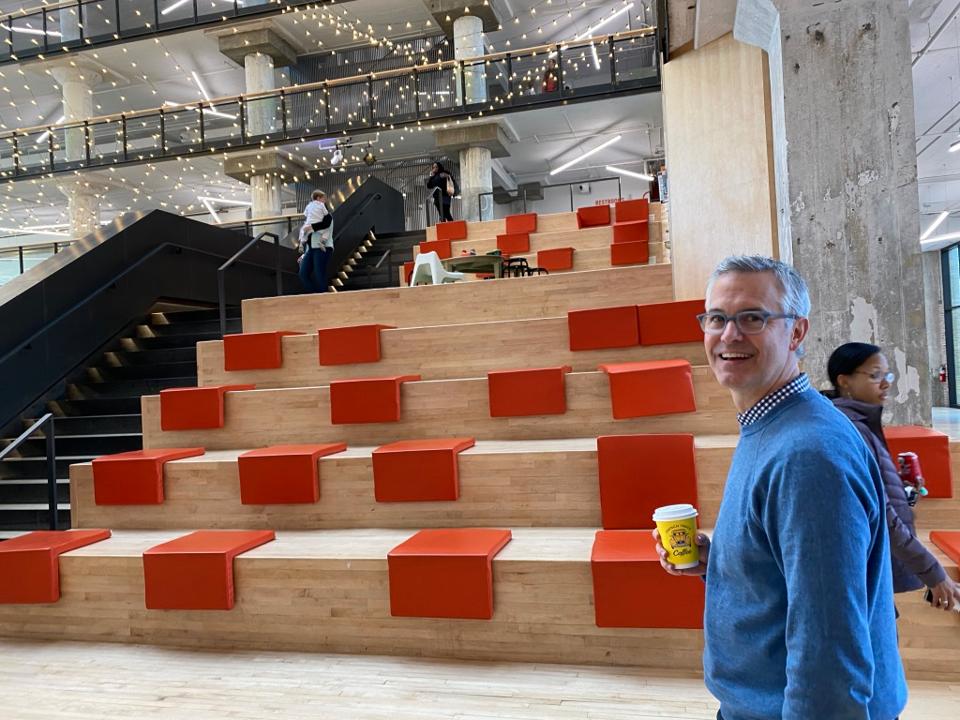 Todd Richardson on the grand staircase in Crosstown Concourse in Memphis.

Right from the start, the concourse plan included a high school and college classrooms. Christian Brothers University (whose main campus is a mile away) opened a health management MBA program in the Concourse.

The first plans for a school failed, but in 2015 Ginger Spickler saw a billboard advertising large grants for innovative new high schools. She put a team together, made a proposal for Crosstown High, and applied for a scholarship. In 2017, the team received an XQ grant of $ 2.5 million. In 2018, the project-based school with different designs was opened on the fourth and fifth floors of the Concourse and uses the cultural and work-related learning opportunities of the complex. (My next post describes the journey of the innovative Crosstown High.)

There are 265 residential units with over 500 residents on the upper floors of the Concourse. Many are rented by commercial tenants in the building. St. Jude rents 40 apartments for families who are in town for treatment and promotion. Residents. The Memphis Teacher Residency rents 40 to teachers in training. Crosstown Arts rents 15 to artists who work as fellows. Eight units can be rented at short notice, similar to a hotel.

Stairs instead of elevators can be seen in every lobby. A red spiral staircase (below) was inspired by the dozen of spiral chutes that ran through the building, delivering packages from the upper floors to waiting trucks and trains. 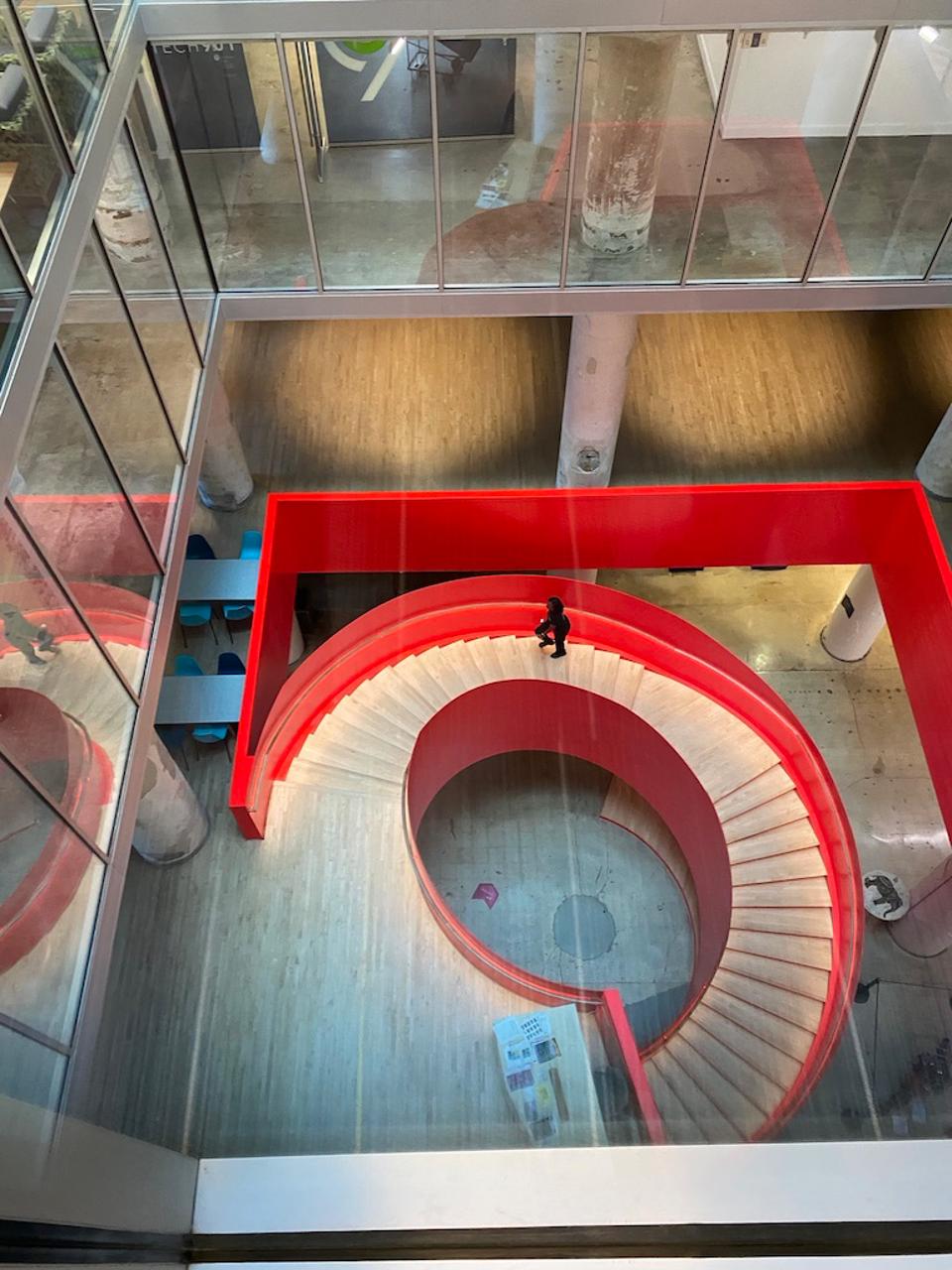 Crosstown Arts, which has grown from a team of two to 50 employees today, moved to the second floor of the Concourse. They developed and run contemporary art galleries, two music venues, a café and bar, an artist residency program and apartments, a joint art factory and a 420-seat black box theater. The lobbies are full of art and often feature live music. Guest speakers and performers visit the Big Stairs at lunchtime (see picture above).

30 sources of funding were pooled to carry out the spectacular renovation. Tax credits were an important part of the Crosstown (and other successful Sears renovations) funding formula. Early commitments from large tenants like Church Health were as important as their shared vision of a thriving community.

Crosstown Concourse is a spectacular place to work, study, exercise, eat, or enjoy the arts. It is the thriving center of an emerging community. It’s not gentrification; It’s a community-led custom-use project. The combination of art, learning and health at its center and a creative mix of public, private and philanthropic funding made the vertical village far more vibrant than it would have been possible for a traditional developer.

In a wonderful improbability, a venture-backed robotics company will open next month next to high school. That probably wouldn’t have happened in Memphis three years ago – it certainly wouldn’t have been in Crosstown. The new urban village attracts California programmers and East Coast artists to ponder a new kind of Memphis lifestyle – one that a professor and artist envisioned.

Crosstown Concourse shows retail stores across the country are closing, and shows the positive community development that can be achieved through public-private partnerships and inspired leadership.

How Ina Garten Destroyed the Meals Community: “Lose My…