The owners Mieko Scott and their daughter Kami Quiñones change the menu at Hella Nuts every day depending on the season. This practice intrigues customers at their West Oakland restaurant and lets them guess what will be next on the menu.

On some days they offer phish and grits with the “fish” made from fried banana blossom. On other days, they serve ikuko soba noodle soup, stuffed with mushrooms, ginger, and seaweed in a chickpea miso broth. or maybe there is shepherd cake with Hella Nuts characteristic walnut meat.

Neither Scott nor Quiñones went to cooking school. Hella Nuts is trial and error, the YouTube school and love for their community.

“Our menu represents us. We are both multiracial. Mieko is Japanese and black. I’m Puerto Rican, Japanese, and Black, ”said Quiñones. “Our heritage and the diversity of the Bay Area. We want to appeal to everyone by offering different, relatable foods. Most of our customers are not vegans. They come because they know we have good food. “ 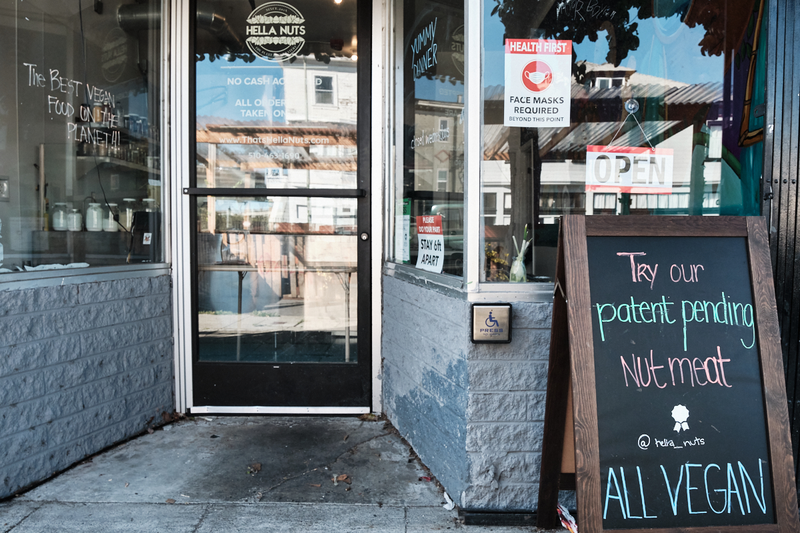 Hella Nuts is a plant-based restaurant in Oakland that offers a regularly changing seasonal menu. Aside from animal products, Hella Nuts does not serve any dishes made from soy, chemicals, fillers or genetically modified ingredients. Photo: Pete Rosos

Both women have a vegetable diet, but how they got there went two different ways.

In 2016, Quiñones was preparing for Louisiana State University when she suffered an accident at work. Her doctor prescribed a variety of medications for her recovery, but the drugs also put a strain on her health.

“I ended up having strange side effects. The only thing I could do was clean my system, so I went raw vegan and ate fruits and vegetables for about six to seven months. After that, I stayed vegan, ”recalls Quiñones.

Scott, who is allergic to soy, mainly ate a pescatarian diet. She joked with her daughter about her raw food choices. “I made fun of her – ‘What are you going to eat? Just salad and fruit, what’s that? ‘”

But Scott eventually changed her mind – and her diet. “I prepared to cook a great fish that I picked from the market. About an hour later I went back to the kitchen and parasites crept out. I couldn’t imagine eating anything that parasites would crawl out of, ”said Scott.

Soon, mother and daughter were working together to develop herbal recipes via Facetime or over the phone. “What should I do tonight? What ingredients do we have? “Scott would ask her daughter. Together they created milk, cheese, sauces, sauces and their now famous nut-based walnut meat. 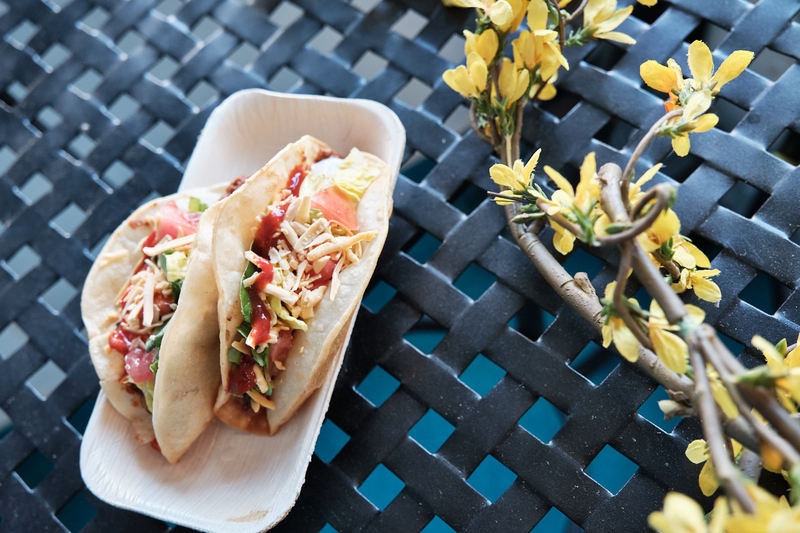 Scott made an effort to come up with an alternative to beef that was similar to taco meat. She manipulated whole food combinations with the nutrient powerhouse walnut and perfected the right blend of spices. The couple showed the walnut meat in their Hella Loaded Tacos. It was a hit and became a trademark.

“We posted on our personal Instagram pages. People would ask how can I buy it? “

The guiding philosophy of Hella Nuts is “no soy, no science”, which means that none of the food that the restaurant produces contains soy, chemicals, fillers or genetically modified ingredients. Quiñones studied agriculture at LSU with the aim of giving color communities better access to fresher, healthier and organic food. Hella Nuts sources its whole food ingredients from a community garden in West Oakland and farms in Stockton and Lodi. Hella Nuts is a waste-free restaurant, using every single piece of product and grain until it’s gone.

“We don’t use plant-based foods that have been produced in a laboratory,” explained Quiñones.

“Our community has high blood pressure and diabetes,” added Scott, referring to color communities across the country. “If there are things we can change on our menu to help people eat plant-based or just eat healthy, we are definitely ready to help. We are happy to change our menu to include additional options based on customer interviews. ” 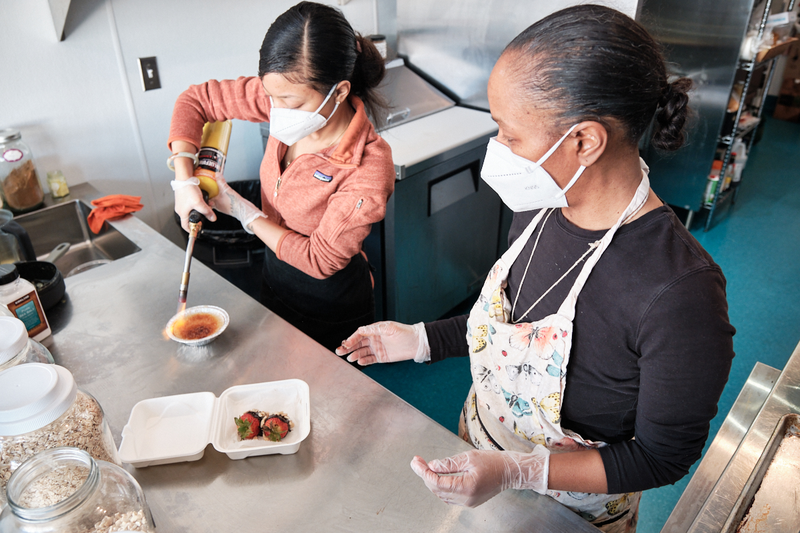 Quiñones and Scott jointly developed the Hella Nuts menu, taking into account the health and preferences of their customers, especially those from color communities. Photo: Pete Rosos

Changes the mother-daughter team made to its menu include switching to monk fruit sugar and agave for sweeteners, as well as offering gluten-free and keto diet options. The Hella Nuts menu offers a variety of beverages, including beverages made from nut milk, coconut-filtered alkaline water, lavender lemonade, and alcoholic beverages such as wine and beer.

When developing the restaurant, the two wanted a company name that would represent the Bay Area, especially Oakland. “I’ll never forget when I was younger and traveled to Miami. I was in an elevator and said, “I’m hot as hell,” and everyone says, “You must be from the Bay Area.” That word embodies everything in the Bay Area, ”said Scott.

In early 2018, the duo sold their groceries and products in local grocery pop-ups, the Oakland Art and Soul Festival, and corporate events. When people started asking about their walnut meat, Scott noticed it was a hot ticket. The demand exceeded their expectations. They applied for a patent and marked the brands “Hella Nuts” and “No Soja, No Science”.

When Scott considered venturing into the food truck business, she contacted a friend with an offer in the store. Instead of building a commercial kitchen in a vehicle, Scott and Quiñones invested in owning their own restaurant. In March 2019 they initiated a complete renovation. The restaurant was scheduled to open in February 2020 just before the pandemic.

Although they couldn’t open their doors to customers, they had the opportunity to change their business model.

“We stuck the pictures for our walnut meat packaging online and opened them for advance sales on our website. It’s gone totally crazy, ”said Quiñones. “We received more than 200 orders in one day.” The restaurant’s kitchen became a manufacturing facility for about eight months. 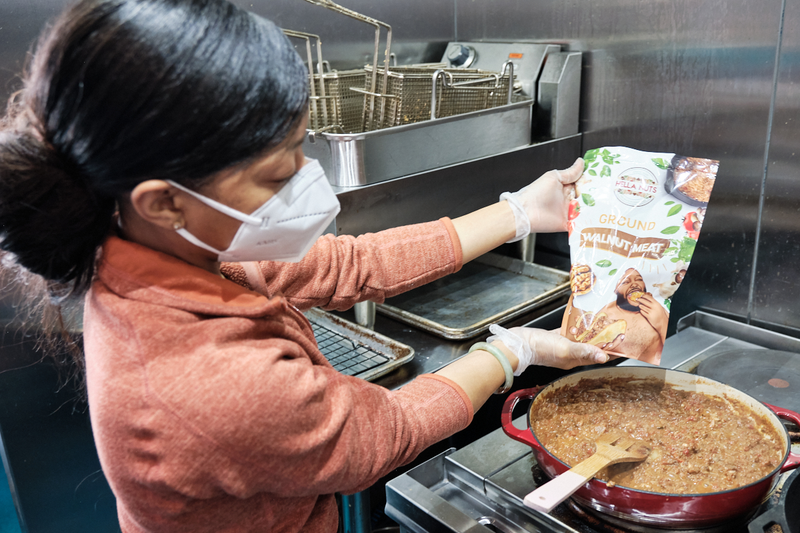 The rap artist Champ Green from Oakland is shown on the packaging of Hella Nuts. Scott and Green are good friends. Green isn’t a vegan, but he’s a fan of plant-based foods. “We wanted to change the perception of what veganism looks like,” said Quiñones.

Being a mother-daughter team is not without its challenges, especially because the two have similar temperaments. But neither would change anything.

“It is definitely a dream come true as I see my child’s passions come true. It’s great to be by your side [her]said Scott. “Our success is based on one another. I wouldn’t do it with anyone else, ”added Quiñones.